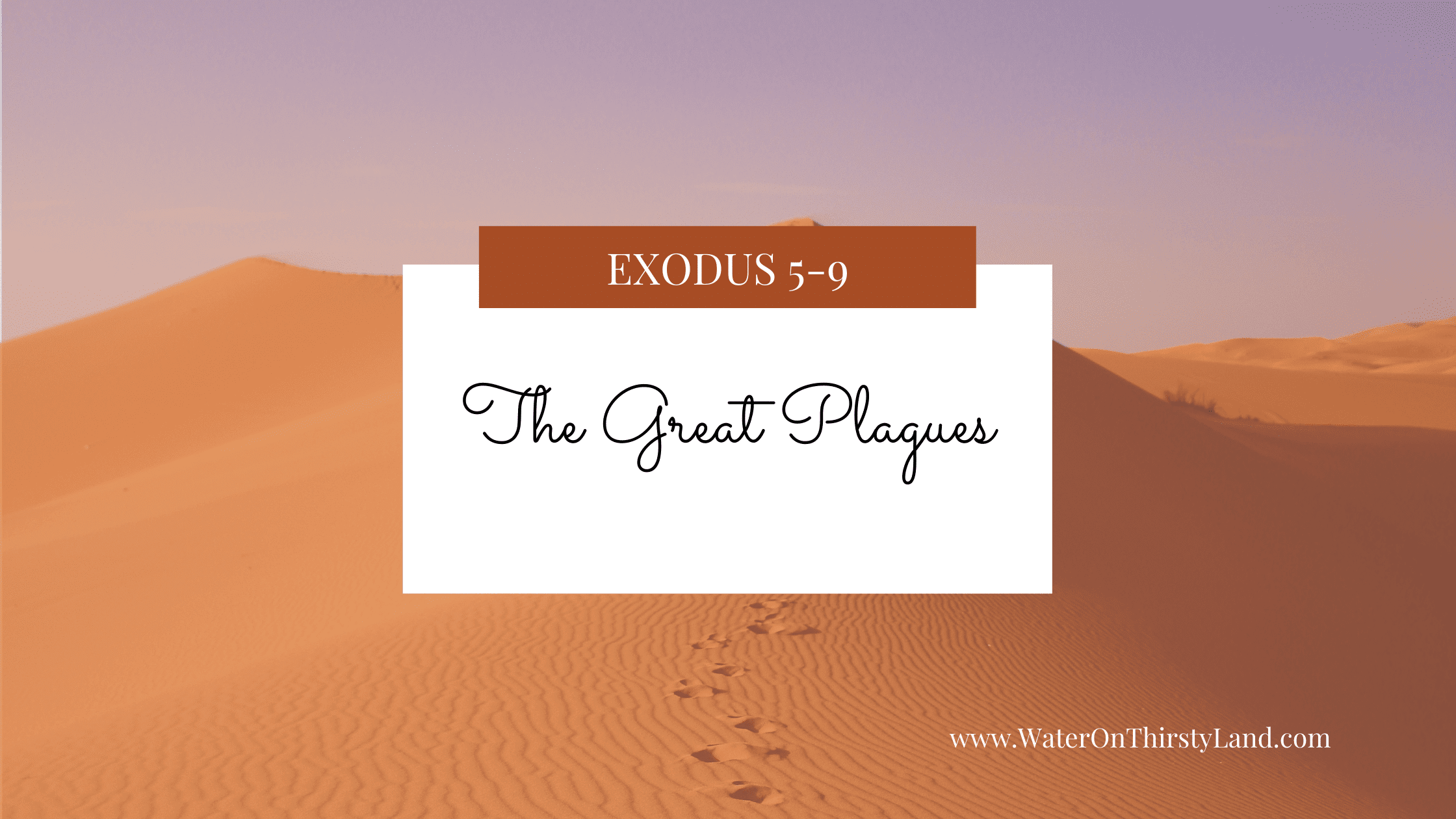 Exodus 5-9 covers the beginning of the great plagues of Egypt. Moses and Aaron have been appointed by God, and they have been pleading with Pharaoh to release the Israelites and give them their freedom. Exodus 5-9 is a grim record of the beginning of disaster, death, and heartbreak for the Egyptians due to Pharoah’s hard heart.

‘Afterward Moses and Aaron went to Pharaoh and said, “This is what the Lord , the God of Israel, says: ‘Let my people go, so that they may hold a festival to me in the wilderness.’ ” Pharaoh said, “Who is the Lord , that I should obey him and let Israel go? I do not know the Lord and I will not let Israel go.” ‘

In that time it was actually not uncommon for Hebrews to leave on pilgrimage to worship. The fact that Pharaoh will not let them go shows he had no intention of easing the Israelites and that he has no regard for God.

Pharaoh gives the Israelites more work and makes life much more difficult for them because Moses requested to let them go worship.

One of the most important lessons throughout scripture is that we will suffer. We suffer so that we will come closer to God.

Moses is not immediately obedient to God and keeps complaining and giving excuses when God tells him to do things for Him. Moses brings another problem to God, and God again responds telling Moses about Himself. God is reminding Moses that He is God, He will keep His promises, and that He is all powerful.

Moses and Aaron were not well received by either the Egyptians or the Israelites, no one listened to or believed them, and they really didn’t even believe in themselves, but God chose to use them of all people to completely alter history and save the Israelites from enslavement.

‘You are to say everything I command you, and your brother Aaron is to tell Pharaoh to let the Israelites go out of his country. ‘

God was more concerned with obedience than skill. He provided them with the skills they needed, God just needed Moses and Aaron to obey Him. He prepared Aaron and Moses for many years and now expected them to do as they were bid.

‘“When Pharaoh says to you, ‘Perform a miracle,’ then say to Aaron, ‘Take your staff and throw it down before Pharaoh,’ and it will become a snake.” ‘

Aaron did as God instructed, turned his staff into a snake, and Pharaoh summoned his “magicians” and they mimicked the miracles with their “secret arts”, but then Aaron’s snake staff ate the magician’s staves. Pharaoh still would not listen.

‘This is what the Lord says: By this you will know that I am the Lord : With the staff that is in my hand I will strike the water of the Nile, and it will be changed into blood. The fish in the Nile will die, and the river will stink; the Egyptians will not be able to drink its water.’ ” ‘

Moses and Aaron turn the Nile into blood as the Pharaoh is bathing, which kills all the fish and makes the river stink and makes the water undrinkable. Moses turns all the water in Egypt to blood. When they did this, the magicians mimicked this and made some water red and the Pharaoh hardened his heart even more.

The Pharaoh’s magicians again mimicked the frog plague with demonic “arts”, but the Pharaoh told Moses and Aaron to pray to “their God” to get rid of the frogs. In the Egyptian culture, their “gods” were not expected to fix or undo what another god had done. So Pharaoh telling them to pray to God was simply because he knew that his “gods” could not do it themselves.

‘Pharaoh summoned Moses and Aaron and said, “Pray to the Lord to take the frogs away from me and my people, and I will let your people go to offer sacrifices to the Lord .” Moses said to Pharaoh, “I leave to you the honor of setting the time for me to pray for you and your officials and your people that you and your houses may be rid of the frogs, except for those that remain in the Nile.” ‘

Moses and Aaron asked God to get rid of the frogs, and God did as they asked and all of the frogs died. When Pharaoh saw this, he hardened his heart again.

The Plague of Gnats

‘Then the Lord said to Moses, “Tell Aaron, ‘Stretch out your staff and strike the dust of the ground,’ and throughout the land of Egypt the dust will become gnats.” ‘

Even though the magicians told Pharaoh it had to be by the hand of God, Pharaoh still hardened his heart more and refused to listen.

The Plague of Flies

‘If you do not let my people go, I will send swarms of flies on you and your officials, on your people and into your houses. The houses of the Egyptians will be full of flies; even the ground will be covered with them. “ ‘But on that day I will deal differently with the land of Goshen, where my people live; no swarms of flies will be there, so that you will know that I, the Lord , am in this land. I will make a distinction between my people and your people. This sign will occur tomorrow.’

In the Egyptian culture it was normal for an entire society to be held accountable for one person’s sins. The whole of Egypt being punished for Pharaoh’s hard heart would have been expected. Also, as we learned in Job, often innocent people will suffer because of someone else’s sins. The consequences do not always fall directly or only on the sinner.

Pharaoh demanded that Moses and Aaron go pray for God to get rid of the flies. They did, and God listened, but again Pharaoh hardened his heart all the more and refused to let them go worship as he said they could.

The Plague on Livestock

‘the hand of the Lord will bring a terrible plague on your livestock in the field—on your horses, donkeys and camels and on your cattle, sheep and goats. But the Lord will make a distinction between the livestock of Israel and that of Egypt, so that no animal belonging to the Israelites will die.’ ” ‘

This plague was to show the Egyptians that only God was in control of their entire lives, wealth, well-being, and all that they had. Pharaoh still hardened his heart and would not release the Israelites.

The Plague of Boils

‘So they took soot from a furnace and stood before Pharaoh. Moses tossed it into the air, and festering boils broke out on people and animals. ‘

It is said that the soot here was representative of the soot that covered Israelite laborers. Pharaoh again refused to let them go. The soot now inflicted disease on the Egyptians.

The Plague of Hail

‘Then the Lord said to Moses, “Get up early in the morning, confront Pharaoh and say to him, ‘This is what the Lord , the God of the Hebrews, says: Let my people go, so that they may worship me, or this time I will send the full force of my plagues against you and against your officials and your people, so you may know that there is no one like me in all the earth. For by now I could have stretched out my hand and struck you and your people with a plague that would have wiped you off the earth. But I have raised you up for this very purpose, that I might show you my power and that my name might be proclaimed in all the earth. ‘

God is giving Moses, Aaron, and Pharaoh a very important warning about the next plague. Some Egyptians feared the Lord and brought in their slaves and livestock to protect them, but Pharaoh did not and many slaves and livestock, and anyone else who was outside was killed by the hail storm. The fields were destroyed, and all their crops.

Pharaoh then admits he has sinned and that he was wrong, and most importantly that the Lord is in the right – but when Moses and Aaron prayed and God halted the storm, Pharaoh again hardened his heart and refused to release the Israelites.

We Will Be Tested | Job Devotional