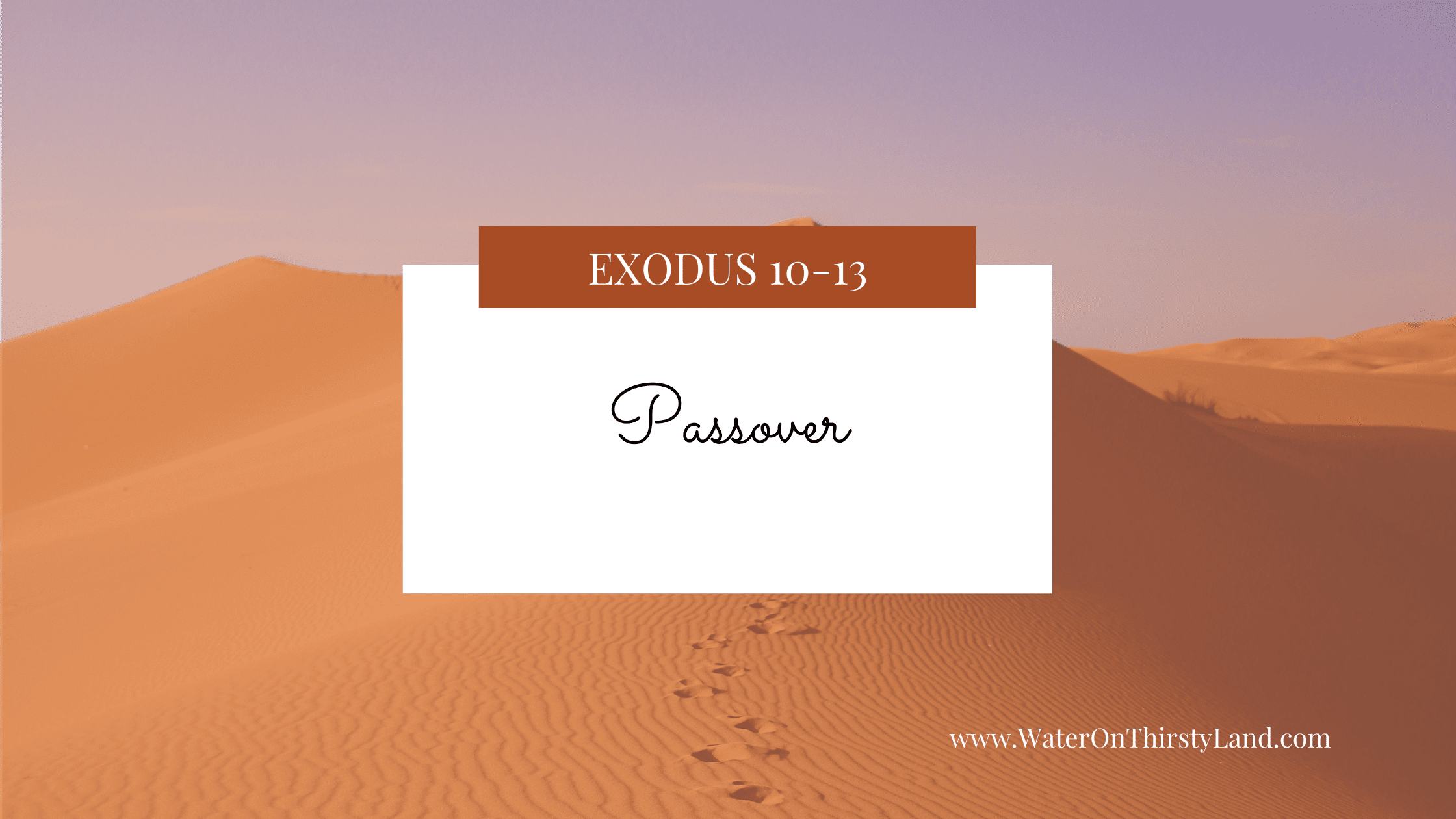 Exodus 10-13 covers the last few great plagues of Egypt, as well as the miraculous Passover to spare God’s faithful people. Why are the events of Exodus 10-13 so important? Why should this history hold such significance in our lives even today? Find out as we explore these chapters together.

The Plague of Locusts

‘They covered the face of the whole land, so that the land was darkened, and they ate all the plants in the land and all the fruit of the trees that the hail had left. Not a green thing remained, neither tree nor plant of the field, through all the land of Egypt. ‘

Pharaoh agreed to let Moses and Aaron go worship by themselves, but would not let their families or herds come with them. He continued to refuse to let the Israelites go, and his heart is again hardened.

The Plague of Darkness

‘So Moses stretched out his hand toward heaven, and there was pitch darkness in all the land of Egypt three days. They did not see one another, nor did anyone rise from his place for three days, but all the people of Israel had light where they lived. ‘

Pharaoh agreed to let them take their families, but now refuses to let him take the herds with them.

God tells Moses that after this last plague, Pharaoh will not just let them leave, but drive them out completely. He gives the Israelites favor with the Egyptians and they are given much gold and silver in anticipation of being run out of the land.

Moses warned Pharaoh of the coming plague but still hardened his heart and would not let them go.

For the Passover, the Israel households marked their door frames with lamb’s blood so that when the tenth plague comes their households will be passed over and their firstborns will be saved. The plague comes, and all of the Egyptian’s firstborn sons are killed. The Egyptian’s then convince Pharaoh to let the Israelites go, but when they have started to leave he changes his mind and chases after them to bring them back as his slaves.

‘then tell them, ‘It is the Passover sacrifice to the Lord , who passed over the houses of the Israelites in Egypt and spared our homes when he struck down the Egyptians.’ ” Then the people bowed down and worshiped. ‘

Why are the Passover Feast instructions so detailed?

Obedience is a huge part of the Passover story. Obeying God was critical because their lives depended on it. The strict and specific instructions were used as a tool for the Israelites to show their faith and trust in God and his instruction.

Sandwiches called “korech” are made from the unleavened bread, maror and charoset which embodies the bitterness of the Israelites over their hard labor, and the spiritual affliction they suffered while enslaved.

The foods eaten as The Passover Seder are tangible reminders of the hardships of slavery and the exaltation of the Israelites in Exodus.

‘The Israelites journeyed from Rameses to Sukkoth. There were about six hundred thousand men on foot, besides women and children. Many other people went up with them, and also large droves of livestock, both flocks and herds. With the dough the Israelites had brought from Egypt, they baked loaves of unleavened bread. The dough was without yeast because they had been driven out of Egypt and did not have time to prepare food for themselves. ‘

The Israelites plundered the Egyptians of their gold, silver, and clothing. They were rushed out with the herds, families, and unleavened breads. Pharaoh finally told them to leave after 430 years in Egypt.

The restrictions are set because God wanted to fix this event into the history, culture, religion, and daily mindset of His people for all generations.

Consecration of the Firstborn

‘“Consecrate to me every firstborn male. The first offspring of every womb among the Israelites belongs to me, whether human or animal.” ‘

God had saved the Israelite’s firstborns during the Passover, and He asks them to dedicate each firstborn to Him as a way to show their appreciation and devotion to Him for saving them.

The Feast of Unleavened Bread

‘Seven days you shall eat unleavened bread, and on the seventh day there shall be a feast to the Lord . Unleavened bread shall be eaten for seven days; no leavened bread shall be seen with you, and no leaven shall be seen with you in all your territory. You shall tell your son on that day, ‘It is because of what the Lord did for me when I came out of Egypt.’ And it shall be to you as a sign on your hand and as a memorial between your eyes, that the law of the Lord may be in your mouth. For with a strong hand the Lord has brought you out of Egypt. You shall therefore keep this statute at its appointed time from year to year. ‘

This “sign on your hand and as a memorial between your eyes” is a figure of speech, like we would say “the words is on the tip of my tongue”. This figure of speech meant that the Passover would symbolize the mighty power of God on behalf of His people.

Why did God always call for a sacrifice?

Since impurity is unacceptable in the presence of God, death occurs when anything impure comes into the presence of God. God would request that the animals be sacrificed in place of themselves. Jesus ultimately fulfilled this sacrificial system when He died on the cross. He was the ultimate sacrifice, making us pure in the sight of God.