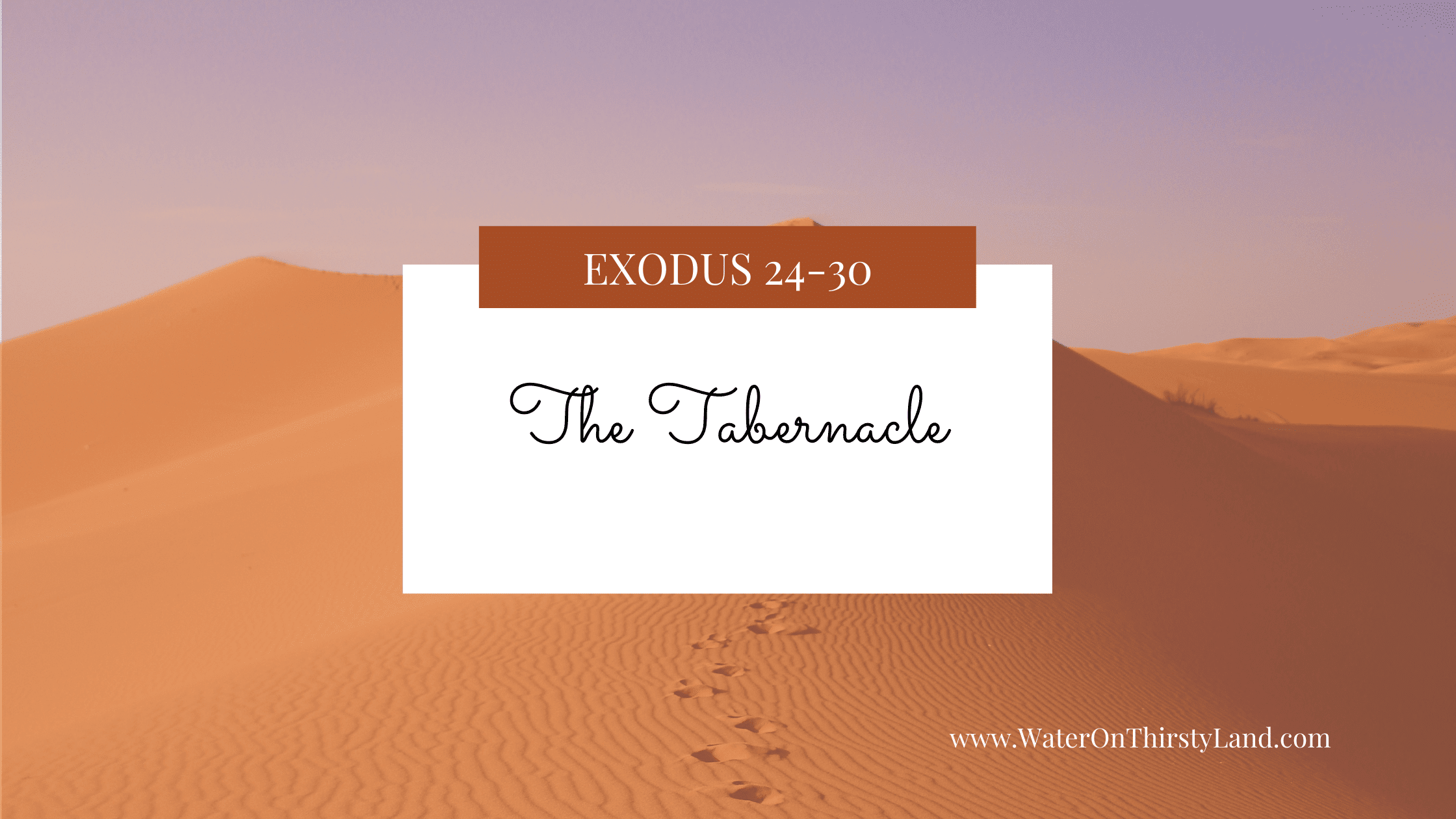 Exodus 24-30 covers the Tabernacle. There is so much here that is vital for us to learn and understand, and so much foreshadowing of what was to come when Jesus came to dwell among men. The Tabernacle is certainly not irrelevant – dive in and explore how this still holds much importance for us even today.

What does all it mean?

Eventually people access God through Jesus, but in OT times they would reach God through the Tabernacle.

‘“Then have them make a sanctuary for me, and I will dwell among them. ‘ Exodus 25:8

God designated the exact specifications for the entire tabernacle as a kind of test of faith and obedience. This manufacturing was done to show their obedience, to instill further obedience in the people, and was given exact ritual practices that would get them into the habit of trusting, honoring, worshiping and obeying God who had saved them. It was a way to aid them in getting used to the new culture God had laid out for them. He wanted His people to have a way to access Him so that they would grow in their faith and obedience to Him.

“Throughout these details we find spiritual parallels to Christ and the church. The tabernacle (literally, dwelling place) points to Jesus the Messiah, who made his dwelling (literally, tabernacled) among us (Jn 1:14, Jn 2:20-21), tore the curtain of the old covenant in two (Mt 27:51), and enabled us to enter the Most Holy Place by His sacrifice (Heb 10:19-22). We can also learn principles about salvation and the church from the pattern of the tabernacle’s construction (Eph 2:21; 1Pe 2:5).”

God laid out an extremely specific design for the Tabernacle. Each piece had specific reasons for its design.

Ark of the Covenant

The ark was the most sacred piece of the tabernacle. The ark held copies of the ten commandments and the Book of the Covenant (which is Exodus 20-23), which explained the specifications for covenant requirements. It was designed to preserve its contents and protect it from human hands.

The priests would cleanse themselves using the Bronze Laver, as they must be clean and pure to enter into the presence of God.

Animal sacrifices were made here. The blood of the animal was sprinkled on the four horns of the altar. The blood on the altar was symbolic of God accepting the sacrifice and forgiving the people, cleansing them of their sins.

This was set in the Holy Place, across from the table of showbread. It had places for lamps which were little gold bowls with wicks sticking out. The other ends of the wicks were sitting in a bowl of oil. The light from the lamp signified the presence of God.

This was always in the presence of God. It had 12 loaves of bread on it, which represented the 12 tribes of Israel.

This was a smaller altar than the Alter of Burnt Offering. The incense would fill the tabernacle with sweet smells. The smells would have helped mask the nasty smells of dead animal and blood, and the smoke would have helped to mask the holy objects further showing that they were holy and set apart for God.

‘Make sacred garments for your brother Aaron to give him dignity and honor. ‘ Exodus 28:2

Aaron and his sons were the first priests of the Lord. They were instructed to wear very specific garments which were to give them dignity and honor.

The Breastplate of the High Priest

‘“Whenever Aaron enters the Holy Place, he will bear the names of the sons of Israel over his heart on the breastpiece of decision as a continuing memorial before the Lord . ‘

I love this section because we see a lot of these stones in ESO…and, well, we are gamers after all! The breastplate of the high priest had 12 specific precious gems embedded into it; Carnelian, topaz, garnet, emerald, sapphire, diamond, agate, amethyst, beryl, onyx, and jasper. Each stone had the name of one of the 12 tribes engraved on it. Each stone was precious and signified the value that God placed on His people.

‘“Make linen undergarments as a covering for the body, reaching from the waist to the thigh. ‘

The priests were told to wear very specific attire, which included linen undergarments so that they were covered and not “spiritually naked” in the presence of the Lord. This was to break them away and set them apart from pagan rituals, which often involved nakedness.

Consecration of the Priests

‘Take the anointing oil and anoint him by pouring it on his head. ‘

This was to symbolize the priests being set apart to serve God for a special purpose.

Why the specific instructions for the animal parts?

‘Then take all the fat on the internal organs, the long lobe of the liver, and both kidneys with the fat on them, and burn them on the altar. But burn the bull’s flesh and its hide and its intestines outside the camp. It is a sin offering. ‘

Some animal parts were considered more desirable and the best parts of the animal were given to God. Other parts were symbolic of sin and were burned, and others were used in pagan rituals and were also burned to ensure that the Israelites would not be tempted to engage in pagan rituals.

What’s with all the blood?

Sin cannot be ignored by a holy God and the consequence of sin is death. The blood was to clearly demonstrate the life-for-life substitution. Pouring out the animal’s blood was to show the pouring out of life to cover the sins of the people. This was a sign of forgiveness and renewed life to the sinner.

God required such a massive price for our sins because He did not want His people to ignore the seriousness of sin. The act of killing an animal, the smells, sounds, and sight of it would be very sobering to and remind them of the price for their sins.

Later, Jesus was the final and perfect sacrifice; the Lamb of God. Jesus sacrificing Himself for our sins means we do not need to sacrifice animals because His blood covers the sins of all people for all time so that we can all be forgiven.

Is the NASB Adventure Bible a good Bible for kids?