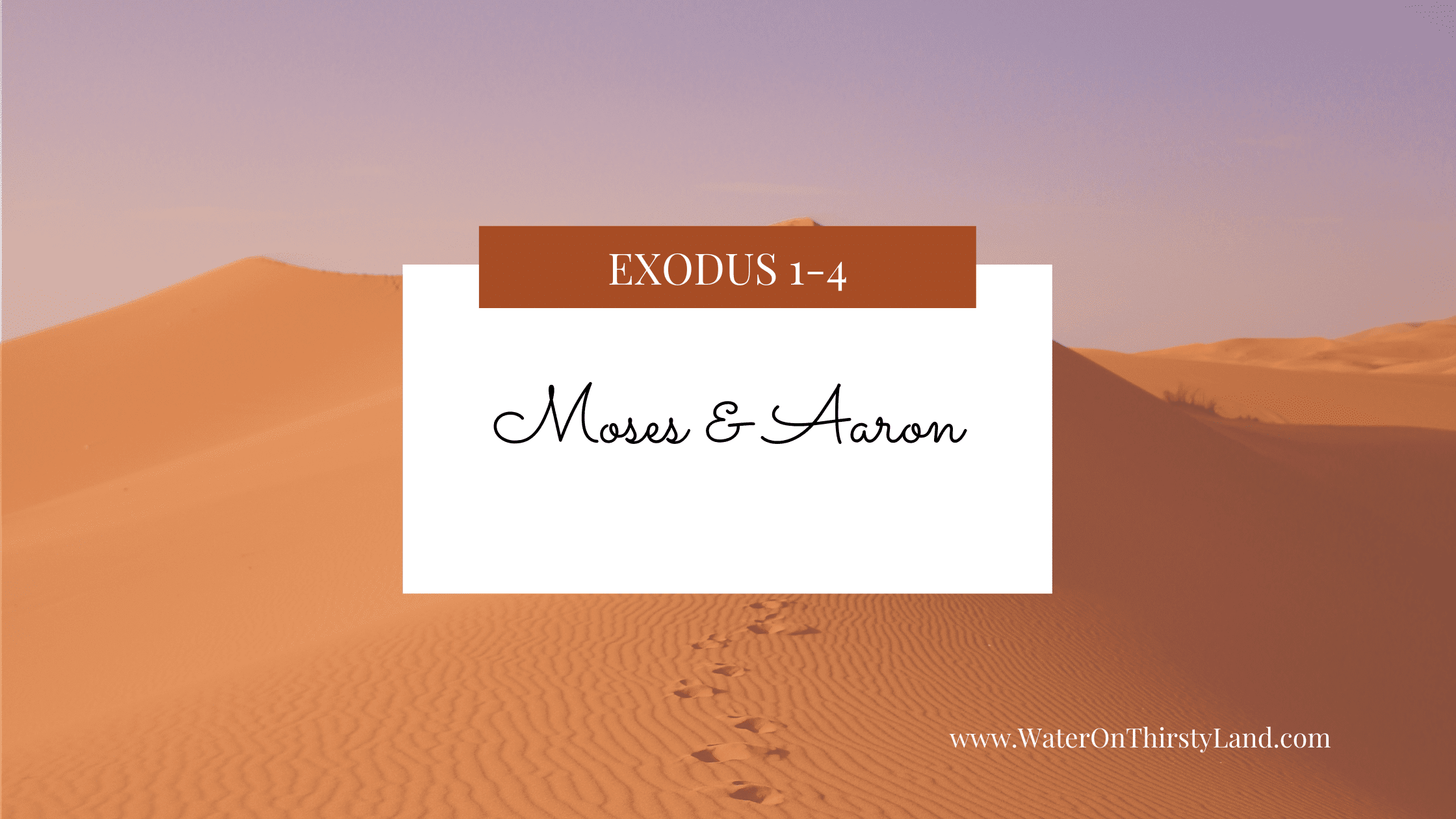 Exodus begins after Joseph had died. The second book of the Pentateuch begins with Exodus 1-4 introducing us to Moses and Aaron, who would lead the Israelites out of slavery and into the wilderness in search of the Promised Land.

‘Now Joseph and all his brothers and all that generation died, but the Israelites were exceedingly fruitful; they multiplied greatly, increased in numbers and became so numerous that the land was filled with them. Then a new king, to whom Joseph meant nothing, came to power in Egypt. “Look,” he said to his people, “the Israelites have become far too numerous for us. Come, we must deal shrewdly with them or they will become even more numerous and, if war breaks out, will join our enemies, fight against us and leave the country.” So they put slave masters over them to oppress them with forced labor, and they built Pithom and Rameses as store cities for Pharaoh. But the more they were oppressed, the more they multiplied and spread; so the Egyptians came to dread the Israelites and worked them ruthlessly. They made their lives bitter with harsh labor in brick and mortar and with all kinds of work in the fields; in all their harsh labor the Egyptians worked them ruthlessly. ‘

When Joseph died his people were enslaved by a new Pharaoh, and the new Pharaoh feared the Hebrews would revolt against him with his enemies. Pharaoh told the Hebrew midwives to kill all baby boys born to the Hebrew women. To Pharaoh, killing the sons would have eliminated a military threat. The daughters could have been implemented into the Egyptian culture as servants and wives.

The midwives lied and told Pharaoh they were unable to kill the baby boys. They saved the Hebrew boys because they feared God and were blessed for their fear of Him.

Pharaoh then dictated that every baby boy born to the Israelites will be slaughtered.

‘And the daughter of Pharaoh came down to wash herself at the river; and her maidens walked along by the river’s side; and when she saw the ark among the flags, she sent her maid to fetch it. And when she had opened it, she saw the child: and, behold, the babe wept. And she had compassion on him, and said, This is one of the Hebrews’ children. Then said his sister to Pharaoh’s daughter, Shall I go and call to thee a nurse of the Hebrew women, that she may nurse the child for thee? And Pharaoh’s daughter said to her, Go. And the maid went and called the child’s mother. And Pharaoh’s daughter said unto her, Take this child away, and nurse it for me, and I will give thee thy wages. And the woman took the child, and nursed it. And the child grew, and she brought him unto Pharaoh’s daughter, and he became her son. And she called his name Moses: and she said, Because I drew him out of the water. ‘ Exodus 2:5-10

A husband and wife from the tribe of Levi had a baby boy, Moses, and to save his life the mother put him in a basket at the river where the daughter of Pharaoh found him.

In that culture, higher status women did not nurse their own children. They would hire wet nurses to breastfeed their infants for them. Part of this may be because breastfeeding has long been said to be a successful form of birth control. Royal families needed to produce as many heirs as possible, so they would not want the royal mothers to be on any form of birth control – they would want them to produce more children asap.

When Moses was about 40 years old, he witnessed an injustice of the Hebrews and killed an Egyptian to save a Hebrew. When Pharaoh found out he tried to kill Moses, so Moses ran away.

It is speculated that this Pharaoh, Thutmose III, hated Moses because he hated his adoptive mother, who may have been the daughter of Hatshepsut. Hatshepsut was the Pharaoh’s mother-in-law, and she dominated the first 20 years of Thutmose III’s reign after his father’s death.

Moses goes to Midian, who were the descendants of Abraham through his wife, Keturah. He saves some women from some cruel shepherds and the father of the women brings him to their home and marries him to his daughter, Zipporah.

Zipporah gives Moses a son. Moses names his son Gershom, which means “stranger” because he has been a stranger in foreign land; in Egypt and now in Midian.

‘And God heard their groaning, and God remembered his covenant with Abraham, with Isaac, and with Jacob. And God looked upon the children of Israel, and God had respect unto them.’

God remembered His covenant that He made with Abraham and his descendants that they would become a great nation and possess the land of Canaan. “He remembered” means that He acted upon this covenant.

Moses went up to the Mountain of God (Mount Sinai) with his father-in-law’s flock. There, an angel of God appeared to Moses in a burning bush. When God saw Moses come to look at the bush and find out why the flames were not consuming the bush, God spoke to Moses.

‘And now the cry of the Israelites has reached me, and I have seen the way the Egyptians are oppressing them. So now, go. I am sending you to Pharaoh to bring my people the Israelites out of Egypt.” But Moses said to God, “Who am I that I should go to Pharaoh and bring the Israelites out of Egypt?” And God said, “I will be with you. And this will be the sign to you that it is I who have sent you: When you have brought the people out of Egypt, you will worship God on this mountain.” Moses said to God, “Suppose I go to the Israelites and say to them, ‘The God of your fathers has sent me to you,’ and they ask me, ‘What is his name?’ Then what shall I tell them?” God said to Moses, “ I am who I am . This is what you are to say to the Israelites: ‘ I am has sent me to you.’ ” ‘

Moses displays so many typical human reactions. Here we see his first complaint and asking why he is to go and do God’s work and save His people, and God responds with who HE is – God was sending Moses, and providing him with the wisdom and instructions he needed to accomplish God’s will.

We don’t always need to know how or why, we just need to obey and trust God.

God calls Himself “I AM”. Moses is not sure how or why the Israelites would listen to him telling them God spoke to him, especially when Moses’ identity was uncertain; he was born a Hebrew and raised an Egyptian, and Egyptians worship Pharaohs as gods. If Moses said “God spoke to me” it may be interpreted as if he were referring to Pharaoh. God gave Moses a different name for Himself to tell the Pharaoh and the Israelites about His instructions.

God tells Moses to go speak with the Elders of Israel and tell them that God has promised to save them. He wants Moses and the Elders to spend 3 days in the wilderness worshiping God and offering sacrifices.

God knows Pharaoh won’t let the Israelites go without a fight, so God says He will force Pharaoh to let His people go. Pharaoh and Moses both seem to understand that this will not merely be a 3 day journey to worship, but will actually be the beginning of the end of Pharaoh’s rule over the Israelites.

‘Moses answered, “What if they do not believe me or listen to me and say, ‘The Lord did not appear to you’?” ‘

Moses does not think that anyone will listen to him, so God tells Moses to take his staff and God turned it into a serpent, then gave his hand a disease and then took it away again. This is to show God’s power over life itself, and of all things on the earth; animal and human lives, and inanimate objects.

Moses was still afraid, and God assures Him that He, who created people, created our mouths, our words, and the ability to speak or not speak, will be with Moses all the way and tell him what to say. Moses still resisted God’s instruction and God grew angry with him, but he had Moses’ brother, Aaron, go with him as well to help him.

‘The Lord said to Moses, “When you return to Egypt, see that you perform before Pharaoh all the wonders I have given you the power to do. But I will harden his heart so that he will not let the people go. ‘

Why does God harden Pharaoh’s heart?

God wants to show that He is all powerful, He is in control, and He uses this as an opportunity to convince His people that He is worthy of worship and Pharaoh is not. If Pharaoh easily let the Israelites go, the people would likely just give credit to the Pharaoh and not come closer to God. God uses this time to prove that He has power over everything and bring His people close to Him.

‘At a lodging place on the way, the Lord met Moses and was about to kill him. But Zipporah took a flint knife, cut off her son’s foreskin and touched Moses’ feet with it. “Surely you are a bridegroom of blood to me,” she said. ‘

Moses had not had his son circumcised, which was a very important part of the covenant that God had made with Abraham’s descendants. In order to save Moses’ life, his wife Zipporah circumcised their son – but was very bitter about it.

What is gratitude and how do we show it?