Names of Jesus: Shepherd and Overseer of Souls 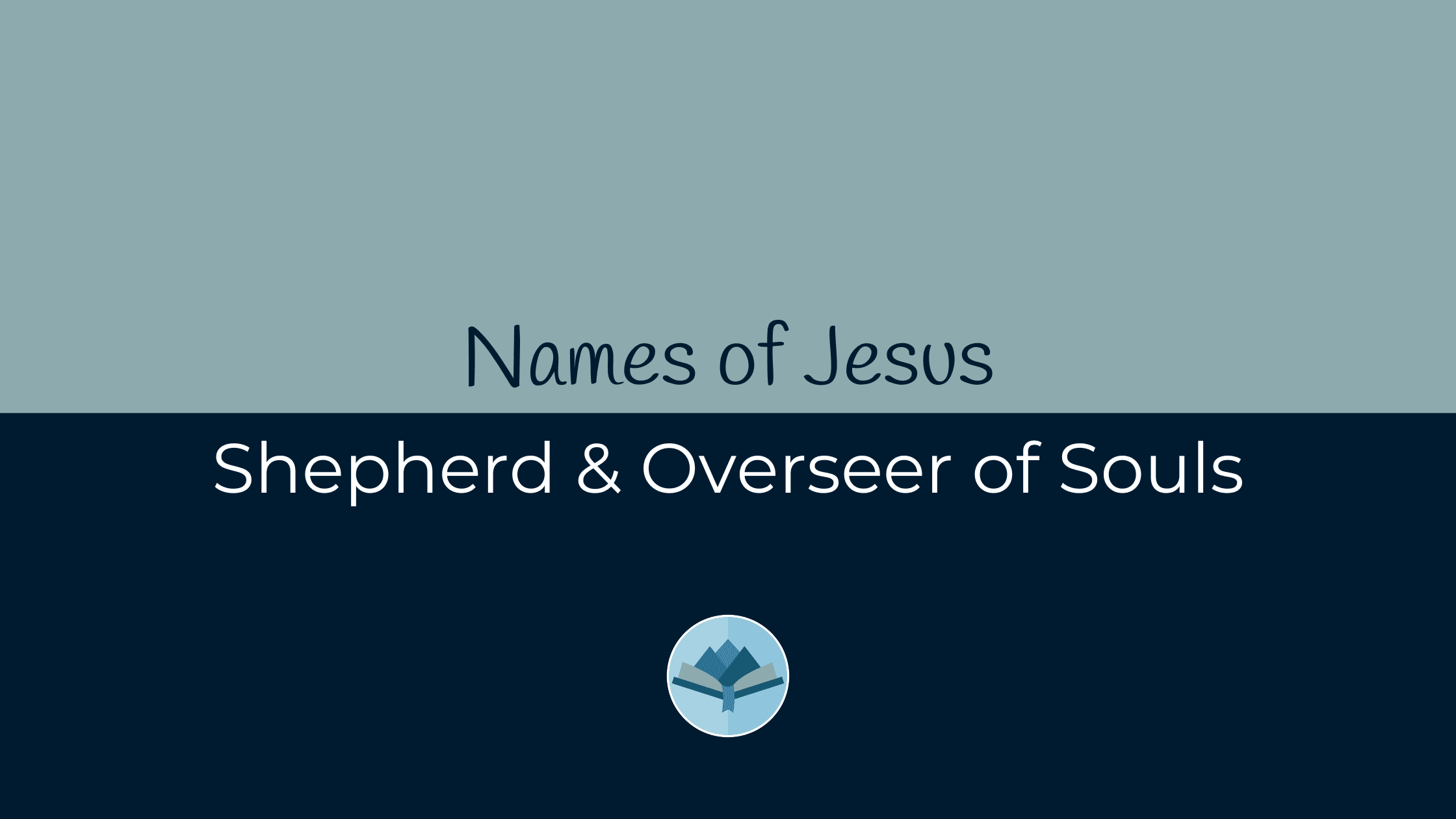 Names of Jesus: Shepherd and Overseer of Souls

All of us at one point or another were wanderers, living life apart from Christ, needing repentance and the forgiveness that only faith in Jesus provides. Every human being is tainted by the curse of sin, and none of us are able to enter eternity with our Heavenly Father on our own efforts. We all fall short and it is only by the grace of God that we are offered Jesus Christ, the Shepherd and Overseer of Souls, as a living sacrifice in our place. Those who choose to place their faith in Christ are those who have returned to the Shepherd and Overseer of Souls, repenting of our sins, and entering into a relationship with our Father in Heaven.

25 For (AH)you were like sheep going astray, but have now returned (AI)to the Shepherd and [h]Overseer of your souls.

23 for all have sinned and fall short of the glory of God. 24 But they are justified[a] freely by his grace through the redemption that is in Christ Jesus. 25 God publicly displayed[b] him[c] at his death[d] as the mercy seat[e] accessible through faith.[f] This was to demonstrate[g] his righteousness, because God in his forbearance had passed over the sins previously committed.[h]26 This was[i] also to demonstrate[j] his righteousness in the present time, so that he would be just[k] and the justifier of the one who lives because of Jesus’ faithfulness.[l]

Jesus is the Head of the Church, presiding over all of His people. He is also the guardian of His people. He is in charge of ensuring that those He oversees are doing what they ought to be doing. Not only this, but He is the Overseer of souls. He guards, leads, and is in charge of our very souls, that part of us that will live on into eternity. He shepherds our souls and oversees not only the things we do but the part of us that affects our very emotions, thoughts, desires, and minds. Jesus is charged with the duty of leading our very souls to salvation.

We are called to be Jesus’ obedient servants

As we enter a relationship with our Heavenly Father through faith in Jesus, we humbly submit ourselves to His instruction. As followers of Jesus, we are commanded to be obedient to His teachings and live by the example that He sets. Faithful obedience is commendable before God and is the calling we have through faith.

18 (B)Servants, be submissive to your masters with all fear, not only to the good and gentle, but also to the harsh. 19 For this is (C)commendable, if because of conscience toward God one endures grief, suffering wrongfully.

6 (A)He who says he abides in Him (B)ought himself also to walk just as He walked.

4 (A)Abide in Me, and I in you. As the branch cannot bear fruit of itself, unless it abides in the vine, neither can you, unless you abide in Me.

As followers of Jesus, we are to live a life of faithful obedience to the Word and will of God. By this, we live in active faith, proclaiming the gospel with the skills, resources, talents, and circumstances God has given us, and drawing others to Himself. Faith is not idle but is constantly working, growing, strengthening, stretching, and impacting. True faith produces fruit as evidence. We should never sit idly by while others work the harvest, but we should be workers in the harvest ourselves no matter the cost. Those who endure in faith – living out active faith in Jesus Christ – will be saved.

15 For (A)I have given you an example, that you should do as I have done to you.

13 (A)But he who endures to the end shall be saved.

Not only are we to be obedient to Christ, but we are to be obedient to those He has placed in positions of authority over us in this life. We are all called to be humble, placing ourselves in the position of a servant. As Christ also humbly served all of mankind, we also are to take up His example and serve others with humility. This is all helpful in the great commission and will share the light and love of God in this darkening world.

22 And (A)you will be hated by all for My name’s sake. (B)But he who endures to the end will be saved.

18 (B)Servants, be submissive to your masters with all fear, not only to the good and gentle, but also to the harsh.

We will be hated for our faith, but the Lord tells us we have no need to be afraid. This is part of enduring, that we will suffer and be persecuted for our faith but we must remain faithful, standing firm, trusting in the Lord to the very end. We will not always understand, it will not make sense, but it would not be faith if we knew all the answers. The example that the Shepherd and Overseer of our Souls sets for us can be trusted, and by His strength, we can endure.

7 He was oppressed and He was afflicted,
Yet (A)He opened not His mouth;
(B)He was led as a lamb to the slaughter,
And as a sheep before its shearers is silent,
So He opened not His mouth.
8 He was (C)taken from [a]prison and from judgment,
And who will declare His generation?
For (D)He was cut off from the land of the living;
For the transgressions of My people He was stricken.
9 (E)And [b]they made His grave with the wicked—
But with the rich at His death,
Because He had done no violence,
Nor was any(F)deceit in His mouth.

5 (A)Bondservants, be obedient to those who are your masters according to the flesh, (B)with fear and trembling, (C)in sincerity of heart, as to Christ; 6 (D)not with eyeservice, as men-pleasers, but as bondservants of Christ, doing the will of God from the heart, 7 with goodwill doing service, as to the Lord, and not to men, 8 (E)knowing that whatever good anyone does, he will receive the same from the Lord, whether he is a slave or free.

19 For this is (A)commendable, if because of conscience toward God one endures grief, suffering wrongfully.

10 (A)Blessed are those who are persecuted for righteousness’ sake,
For theirs is the kingdom of heaven.

17 For (A)our light affliction, which is but for a moment, is working for us a far more exceeding and eternal weight of glory,

14 (A)But even if you should suffer for righteousness’ sake, you are blessed. (B)“And do not be afraid of their threats, nor be troubled.”

6 (A)In this you greatly rejoice, though now (B)for a little while, if need be, (C)you have been [a]grieved by various trials, 7 that (D)the genuineness of your faith, being much more precious than gold that perishes, though (E)it is tested by fire, (F)may be found to praise, honor, and glory at the revelation of Jesus Christ,

18 For I consider that (A)the sufferings of this present time are not worthy to be compared with the glory which shall be revealed in us.

Active faith requires living by the example that Jesus sets for us all throughout scripture. His responses in every situation we read about, every lesson He teaches us through His Word, every manner in which He treated others of all backgrounds, and even every prayer He lifted up to Heaven are all opportunities to learn. We should learn about Him, and by learning about Him we should be learning how to live more like Him.

20 For (A)what credit is it if, when you are beaten for your faults, you take it patiently? But when you do good and suffer, if you take it patiently, this is commendable before God. 21 For (B)to this you were called, because Christ also suffered for [a]us, (C)leaving [b]us an example, that you should follow His steps:

22 “Who(D) committed no sin,
Nor was deceit found in His mouth”;

23 (E)who, when He was reviled, did not revile in return; when He suffered, He did not threaten, but (F)committed Himself to Him who judges righteously; 24 (G)who Himself bore our sins in His own body on the tree, (H)that we, having died to sins, might live for righteousness—(I)by whose [c]stripes you were healed.

As the Shepherd and Overseer of Souls, He is the source of true rest for our souls. By abiding in Him, learning from Him, and truly living in active faith, He will provide all that we truly need and lead us to eternal rest. All that we will go through in this present life will be worth the blessings ahead of us in eternity with Him for those who endure.

29 Take My yoke upon you (A)and learn from Me, for I am [a]gentle and (B)lowly in heart, (C)and you will find rest for your souls.

25 For (AH)you were like sheep going astray, but have now returned (AI)to the Shepherd and [h]Overseer of your souls.

Spend time with Jesus every day. Learn more from Him, and prayerfully live out every day for Him. As we continue to live in this darkening world, we must cling to the Light of the world, the One who has the power to lead us in the right direction, and the strength we need in order to endure every trial we will face along the way.

6 But now we have been delivered from the law, having died to what we were held by, so that we should serve (A)in the newness of the Spirit and not in the oldness of the letter.

10 (A)If you keep My commandments, you will abide in My love, just as I have kept My Father’s commandments and abide in His love.

21 For (A)He made Him who knew no sin to be sin for us, that we might become (B)the righteousness of God in Him.

Women of the Word: Leading Women

Names of Jesus: The Door