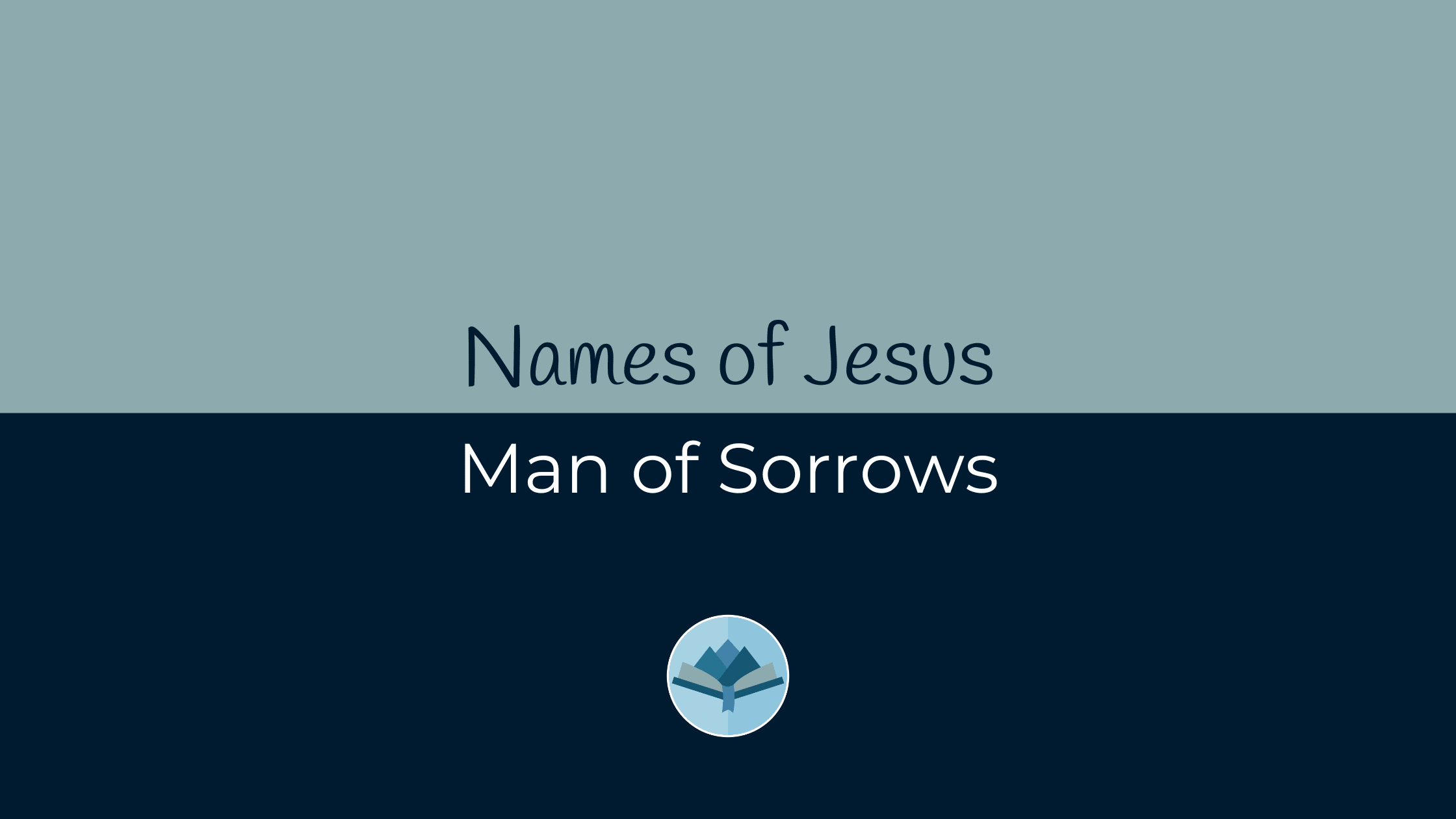 2 For He shall grow up before Him as a tender plant,
And as a root out of dry ground.
He has no [a]form or [b]comeliness;
And when we see Him,
There is no [c]beauty that we should desire Him.
3 He is despised and [d]rejected by men,
A Man of [e]sorrows and acquainted with [f]grief.
And we hid, as it were, our faces from Him;
He was despised, and we did not esteem Him.

4 Surely He has borne our [g]griefs
And carried our [h]sorrows;
Yet we [i]esteemed Him stricken,
[j]Smitten by God, and afflicted.

Sorrow is a mental and physical pain and depression. It is deep and severe. When David was being hunted by his own son, at risk of death constantly, David was deeply grieved by sorrow. David was anguished. This is a sorrow of body and soul, just as the prophecy tells of the Messiah.

17 For I am ready to fall,
And my sorrow is continually before me.
18 For I will declare my iniquity;
I will be in [a]anguish over my sin.
19 But my enemies are vigorous, and they are strong;
And those who hate me wrongfully have multiplied.
20 Those also who render evil for good,
They are my adversaries, because I follow what is good.

Grief is a physical and spiritual sickness, anxiety, calamity, and malady. This same word is used to describe a wound of violence against Jerusalem, as well as many physical diseases and even plagues in the Old Testament. Jesus, the Man of Sorrows, is acquainted with grief. This acquaintance is a deep, divine knowing. It is the same word used when referring to God knowing His creation deeply, and His creation knowing Him. It is a recognition, discernment, and revelation. For Jesus to be acquainted with grief is for Him to be deeply aware of, and experienced with, grief.

7 As a fountain [a]wells up with water,
So she wells up with her wickedness.
Violence and plundering are heard in her.
Before Me continually are[b]grief and wounds.

What is godly sorrow?

13 But go and learn what this means: ‘I desire mercy and not sacrifice.’ For I did not come to call the righteous, but sinners, [a]to repentance.”

What leads to sorrow and grief?

The sorrows and grief that the Man of Sorrows carried were for our transgressions. For the sins and wickedness of the world, Jesus bore our grief and carried our sorrows. He became like one of us, becoming fully man and fully God, and lived a human life in which He experienced immense pain and suffering firsthand. During His ministry, He also displayed His deep knowledge of grief by healing the afflictions of so many people. Sin leads to sorrow and grief.

16 When evening had come, they brought to Him many who were demon-possessed. And He cast out the spirits with a word, and healed all who were sick, 17 that it might be fulfilled which was spoken by Isaiah the prophet, saying:

“He Himself took our infirmities
And bore our sicknesses.”

Sorrow and grief are the results of sin and wickedness. Sin grieves God, and the sorrows imparted on Jesus were because of the sins of the world. We are grieved and experience our own sorrow because of the curse of sin on all mankind. We live in a sin-filled world that is contaminated by the presence of sin and evil, and sin leads to destruction. This destruction is eternal separation from God and all that is good.

23 Now it was not written for his sake alone that it was imputed to him, 24 but also for us. It shall be imputed to us who believe in Him who raised up Jesus our Lord from the dead, 25 who was delivered up because of our offenses, and was raised because of our justification.

23 For the wages of sin is death, but the [a]gift of God is eternal life in Christ Jesus our Lord.

15 Then, when desire has conceived, it gives birth to sin; and sin, when it is full-grown, brings forth death.

23 for all have sinned and fall short of the glory of God, 24 being justified [a]freely by His grace through the redemption that is in Christ Jesus, 25 whom God set forth as a [b]propitiation by His blood, through faith, to demonstrate His righteousness, because in His forbearance God had passed over the sins that were previously committed, 26 to demonstrate at the present time His righteousness, that He might be just and the justifier of the one who has faith in Jesus.

When Jesus bore the full weight of all the sins of the world as He hung on the cross to die, He bore our grief and carried our sorrow, and experienced that separation from God at that moment. He knew the ultimate grief and sorrow as He carried all the world’s sins so that we would not have to suffer that sorrow for eternity.

46 And about the ninth hour Jesus cried out with a loud voice, saying, “Eli, Eli, lama sabachthani?” that is, “My God, My God, why have You forsaken Me?”

Why did Jesus carry our sorrow?

Jesus bore our griefs, and He was also acquainted with grief. To be our Messiah, our Great High Priest, Jesus had to know our grief firsthand. He had to experience the same pains and sufferings we experience. He also had a knowledge of grief by healing the ailments and afflictions of so many we read about in scripture. Jesus, the Man of Sorrows, carried the sorrows and griefs of the world so that those who believe in Him as the Man of Sorrows would not have to bear their own sorrow for eternity.

7 For scarcely for a righteous man will one die; yet perhaps for a good man someone would even dare to die. 8 But God demonstrates His own love toward us, in that while we were still sinners, Christ died for us. 9 Much more then, having now been justified by His blood, we shall be saved from wrath through Him.

8 For nation will rise against nation, and kingdom against kingdom. And there will be earthquakes in various places, and there will be famines [a]and troubles. These are the beginnings of [b]sorrows.

10 Many sorrows shall be to the wicked;
But he who trusts in the Lord, mercy shall surround him.

Why should I believe in the Man of Sorrows?

Jesus died so that we would not have to be separated from God forever. Because God loves us so much that even though we deserve this death He sent His One and Only Son to die in our place so we could be reconciled to Him if we have faith in the blood that was spilled for our sake. Choosing to have faith in the Man of Sorrows leads to freedom from bondage to sin, and gives you personal access to God, the gift of the Holy Spirit, and the strength of Jesus Christ over sin in your life.

34 “But take heed to yourselves, lest your hearts be weighed down with [a]carousing, drunkenness, and cares of this life, and that Day come on you unexpectedly. 35 For it will come as a snare on all those who dwell on the face of the whole earth. 36 Watch therefore, and pray always that you may [b]be counted worthy to escape all these things that will come to pass, and to stand before the Son of Man.”

With faith comes guidance through this life, leading us in the ways of God, and preparing us for eternity with Him. We must be watchful, always aware that Christ could return at any time, and we should be found ready for Him as His Bride when He returns. Faith enables us to endure to the end, resisting the evils of the world, and heals us of worldly sorrows because of unrepented sin.

Sin leads to death, and for those who never choose to believe in the Man of Sorrows, death is a permanent, eternal death of their relationship with God. While we draw breath, there is still the opportunity to choose faith in Jesus Christ. We never know how much longer we have, so we never know when our last opportunity to believe will be.

9 But those who desire to be rich fall into temptation and a snare, and into many foolish and harmful lusts which drown men in destruction and perdition. 10 For the love of money is a root of all kinds of evil, for which some have strayed from the faith in their greediness, and pierced themselves through with many sorrows.

How can the Love God Greatly Bible lead women closer to the Lord?

Names of Jesus: Lamb of God