Names of Jesus: Resurrection and the Life 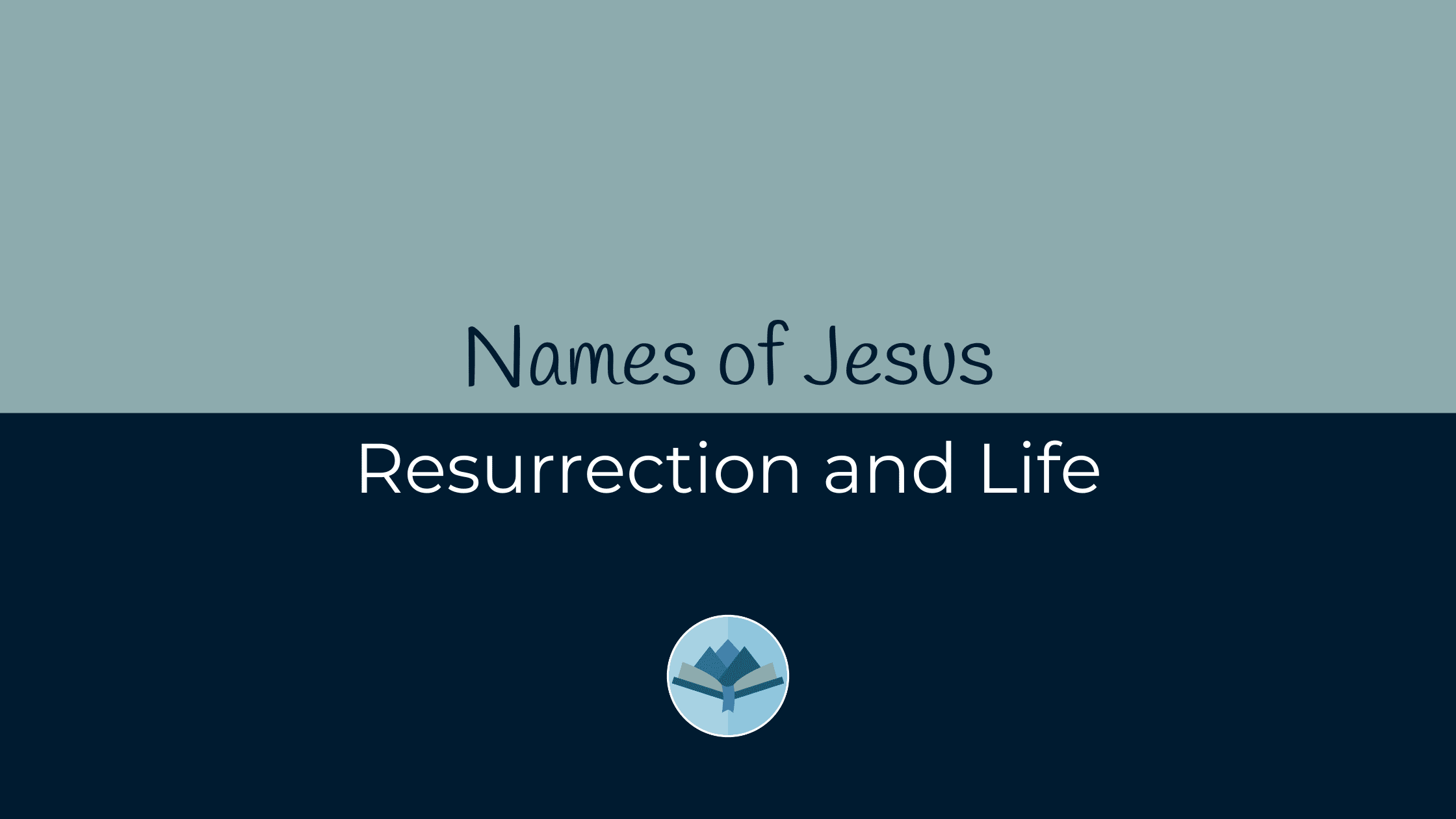 Names of Jesus: Resurrection and the Life

Jesus makes seven I Am statements throughout the Gospel of John, five of them are absolute statements in which He uses the exact same words God used when identifying Himself to Moses at the burning bush. Each of these I Am statements teaches us about His omnipotence, omniscience, and omnipresence. When Jesus goes to see Mary and Martha after their brother, Lazarus, has died He declares “I Am the resurrection and the life”.

25 Jesus said to her, “I am the resurrection and the life. He who believes in Me, though he may die, he shall live.

Resurrection is the divine miracle of someone who is dead being raised to life in body and soul. This is either temporal life, such as with Lazarus, or eternal, glorified life, which is the case for Jesus when He rises from the dead after the crucifixion, and will be the case for His followers upon His return.

9 He is the one who saved us[a] and called us with a holy calling, not based on[b] our works but on his own purpose and grace, granted to us in Christ Jesus before time began,[c]10 but now made visible through the appearing of our Savior Christ Jesus. He[d] has broken the power of death and brought life and immortality to light through the gospel!

Jesus being the Life indicates that He is the giver of life – all things are created through, by, and for Him, through faith in Him those who believe obtain spiritual life, and one day will obtain eternal life. Not only this, but with eternal life everything will be made new, and the righteous will also receive new spiritual bodies that will, by the power of Christ, be immune to the power of death.

Those who have faith in Jesus are given the gift of the Holy Spirit, and have personal access to the power of Him who was raised from the dead defeating sin and death. By the power of Jesus, we can resist sin in this life and obtain the promise of eternal life. Because Jesus was raised from the dead, we can rely on His almighty strength in our own battles, and cling to Him, enduring until the end of our earthly lives in faith, whenever that may be for each of us.

To expand on your understanding, explore these studies as well:

The Resurrection of the Dead

28 And do not fear those who kill the body but cannot kill the soul. But rather fear Him who is able to destroy both soul and body in [a]hell.

15 I have hope in God, which they themselves also accept, that there will be a resurrection [a]of the dead, both of the just and the unjust.

Those who have done the will of God, believed in Jesus Christ as the Resurrection and the Life, and endured to the end of their earthly life in faith and obedience to the Lord, will obtain the promise of eternal life after Christ returns. Those who have fallen away or clung to unbelief, dying without personal faith and relationship with Jesus, will have died in their sin, without the blood of Jesus to cover them, and will not have their names written in the book of Life. Those whose names are not written in the Book of Life are sent to spend eternity in the Lake of Fire, separated from God and all that is good with no chance of relief or release.

12 Then He also said to him who invited Him, “When you give a dinner or a supper, do not ask your friends, your brothers, your relatives, nor rich neighbors, lest they also invite you back, and you be repaid. 13 But when you give a feast, invite the poor, the[a]maimed, the lame, the blind. 14 And you will be blessed, because they cannot repay you; for you shall be repaid at the resurrection of the just.”

The Resurrection of the Body

4 Then[a] I saw thrones and seated on them were those who had been given authority to judge.[b] I also saw the souls of those who had been beheaded because of the testimony about Jesus and because of the word of God. These[c] had not worshiped the beast or his image and had refused to receive his mark on their forehead or hand. They[d] came to life[e] and reigned with Christ for a thousand years. 5 (The rest of the dead did not come to life until the thousand years were finished.)[f] This is the first resurrection. 6 Blessed and holy is the one who takes part[g] in the first resurrection. The second death has no power over them,[h] but they will be priests of God and of Christ, and they will reign with him for a thousand years.

20 But our citizenship is in heaven—and we also eagerly await a savior from there, the Lord Jesus Christ, 21 who will transform these humble bodies of ours[a] into the likeness of his glorious body by means of that power by which he is able to subject all things to himself.

35 But someone will say, “How are the dead raised? With what kind of body will they come?” 36 Fool! What you sow will not come to life unless it dies. 37 And what you sow is not the body that is to be, but a bare seed[a]—perhaps of wheat or something else. 38 But God gives it a body just as he planned, and to each of the seeds a body of its own. 39 All flesh is not the same: People have one flesh, animals have another, birds and fish another.[b] 40 And there are heavenly bodies and earthly bodies. The glory of the heavenly body is one sort and the earthly another. 41 There is one glory of the sun, and another glory of the moon and another glory of the stars, for star differs from star in glory.

42 It is the same with the resurrection of the dead. What is sown is perishable, what is raised is imperishable.[c] 43 It is sown in dishonor, it is raised in glory; it is sown in weakness, it is raised in power; 44 it is sown a natural body, it is raised a spiritual body. If there is a natural body, there is also a spiritual body. 45 So also it is written, “The first man, Adam, became a living person”;[d] the last Adam became a life-giving spirit. 46 However, the spiritual did not come first, but the natural, and then the spiritual. 47 The first man is from the earth, made of dust; the second man is from heaven. 48 Like the one made of dust, so too are those made of dust, and like the one from heaven, so too those who are heavenly. 49 And just as we have borne the image of the man of dust, let us also bear[e] the image of the man of heaven.

Jesus is the Resurrection and the Life. He is the author and perfector of life, gives new, spiritual life to those who believe in Him, and one day all who believe will also be resurrected as He was resurrected. Those whose names are written in the Book of Life will be with Him for eternity one day, and those who choose to continue in their rejection of Him as the Resurrection and the Life will inherit eternity separated from Him and all that is good. Today is the day of salvation – we are not promised tomorrow and should seek to know Jesus Christ as our Risen Lord while there is still time before time runs out and He returns to judge the world.

Main Themes of the Book of Esther

Main Themes of the Book of Judges

Names of Jesus: The Door